Though the world has been in mourning for the roof of the Notre Dame Cathedral in Paris, several architects have come forward with designs to breathe new life into the building.

Last month, French legislators announced that they would be holding an international design competition for how the beloved cathedral ought to be reconstructed.

French architectural firm Vincent Callebaut recently released their own ideas for the cathedral’s reconstruction – and news outlets are marveling over the eco-friendly new designs.

The Palingenesis roofing design, which means “rebirth” or “regeneration” in Greek, features a massive stain-glassed spire and greenhouse system which would generate clean energy for the cathedral.

“Through energetic solidarity with the body of the historic monument, the contemporary, three-dimensional Gothic stained glass graft produces all the electricity, heat and passive ventilation that the cathedral might require, by combining passive systems and advanced renewable energies,” the firm said in a press release.

“The new wooden frame is covered with a three-dimensional crystal glass dress subdivided into faceted diamond-shaped elements. These crystals consist of an organic active layer, made of carbon, hydrogen, nitrogen and oxygen, which absorbs light and transforms it into power. This energy, stored in hydrogen fuel cells, will be directly redistributed throughout the cathedral.” 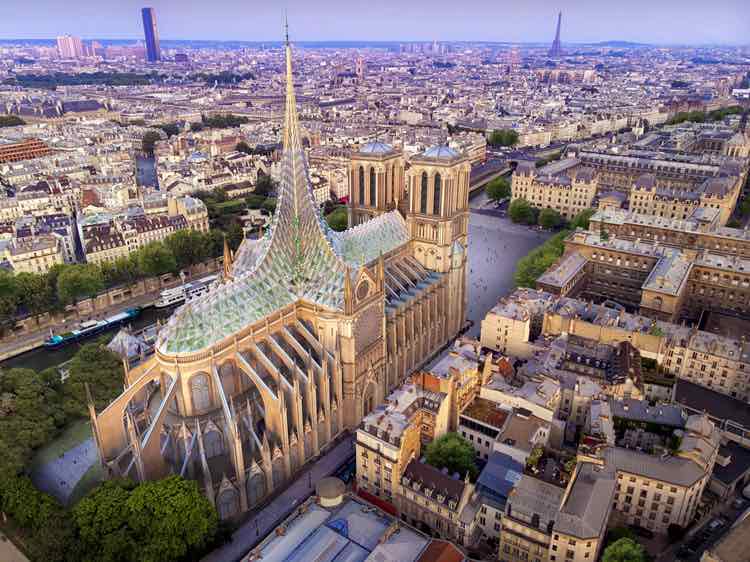 “To avoid any greenhouse effect, these crystalline scales open at the bottom of the frame along the acroterion of the nave and transept, creating a natural air flow towards the top of the spire which mimics a wind powered chimney.”

Furthermore, the roof could support a new fruit and produce garden which could be managed by cathedral staffers or charity workers.

“Up to 21 tons of fruits and vegetables could be harvested and directly redistributed for free each year,” said the firm. “To that end, a farmers’ market would be held every week on the forecourt of Notre Dame.”

Despite the obvious innovation behind their blueprints, Callebaut is not the only firm which has taken an eco-friendly approach to their designs.

Representatives from Summum Architecture told Fast Company that they hope to reconstruct the roof as a sanctuary for endangered birds and insects which would be closed off from the public. Studio Nab, on the other hand, wants to build a greenhouse that would house beehives as an homage to the 180,000 honeybees that survived the Notre Dame fire. The pollinator sanctuary would also serve as an educational center to the public.

Meanwhile, Dutch architectural firm Studio Drift has proposed to build a spire and rooftop made entirely out of recycled ocean plastic.

Regardless of the competition, Callebaut says that it believes its design is best suited for adapting the ancient building into a more useful city landmark.

“We advocate for an exemplary project in ecological engineering that feels true to its time and avoids a pastiche architecture that turns the city into an open-air museum,” said Callebaut. “Circular economy, renewable energies, inclusive social innovation, urban agriculture, protection of biodiversity, without forgetting beauty and spiritual elevation: our reconstruction project feeds on such values to deliver a deep, conscious meaning.”